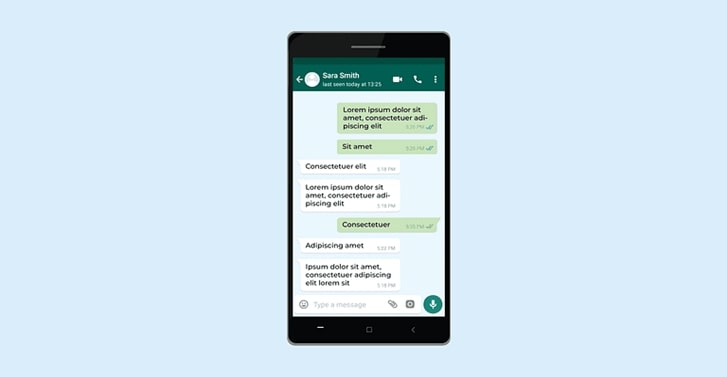 If a law is in fact enacted to mandate intermediaries to assist investigation authorities to reveal chats of an accused person, major constitutional issues would be at stake in relation to privacy.Today, smartphones are not merely part of our life, theyÂ areÂ our life. They contain theÂ âcombined footprint of what has been occurring socially, economically, personally, psychologically, spiritually and sometimes even sexually, in the ownerâs lifeâÂ (United States v. Adamou Djibo).Recently, there has been a great deal of controversy surrounding the use of WhatsApp chats in criminal investigations, considering the extent of private information that is contained in these chats. This article attempts to shed some light on this interesting legal issue.

I. Compelling the accused to unlock his phone to access WhatsApp chats .When police authorities access the locked phone of an accused, can it compel the accused to unlock it or provide the password? The Indiana Supreme Court in the United States was recently faced with this significant constitutional question inÂ Seo v. StateÂ (2020).The petitioner, Seo, was accused of harassing DS, who she had first contacted with a number associated with her iPhone. Subsequently, DS started receiving multiple calls and text messages from various unassigned numbers and the police authorities believed that Seo was placing those calls by concealing her phone number through a mobile app. The police arrested Seo and obtained a warrant that ordered her to unlock her iPhone so that police could search it.However, Seo refused to unlock her iPhone and she was held in contempt by the trial court. She subsequently appealed against the contempt order and the Indiana Supreme Court reversed the same, observing that forcing Seo to unlock her iPhone would violate her right against self-incrimination.The decision inÂ SeoÂ raises an interesting question in Indian context also. Similar to the fifth amendment right in USA, Article 20(3) of the Indian Constitution mandates thatÂ âno person accused of an offence shall be compelled to be a witness against himself.âThe Indian law on self-incrimination can be summarized in the following points based on a combined reading ofÂ State ofÂ Bombay v. Kathi Kalu OghadÂ (1962)Â andÂ Selvi v. State of KarnatakaÂ (2010):Broadly, Article 20(3) protects an accused from being compelled to give âtestimonial evidenceâ in relation to self-incriminatory material. The said protection extends not only to evidence given in a court of law, but also to compelled testimony obtained from an accused during investigation.Evidence can be classified into three broad categories, namely - oral testimony, documentary evidence, and material evidence (physical evidence). InÂ Kathi Kalu Oghad,Â testimonial evidence was defined in a restrictive manner asÂ oral or written statementsÂ which convey theÂ personal knowledgeÂ of a person in respect of relevant facts. However, inÂ Selvi, the scope of testimonial evidence was extended to include any kind of evidence in whichÂ personal knowledge is conveyedÂ in respect of a relevant fact. Therefore, testimonial evidence is a piece of evidence that isÂ communicativeÂ in nature and involves the use of mental faculties.On the other hand, Article 20(3) does not apply to physical evidence since it is merely identificatory in nature. Physical evidence, like a blood sample or a fingerprint,Â does not involve use of mental facultiesÂ and it does not lead to any communicationÂ based on personal knowledgeÂ of the accused which may incriminate him/ her. While in the case of testimonial evidence, an accused can give different statements to a question asked of him/her, in the case of physical evidence, the intrinsic character of the evidence cannot change. Thus, furnishing of physical evidence does not exactly amount âto be a witnessâ.

For testimonial evidence to be self-incriminatory, it must be of such a character thatÂ by itself, it should have the tendency of incriminating the accused. However, it is imperative to note that self-incriminatory material is not limited to merely confessions, but also extends to answers which âfurnish a link in the chain of evidenceâ to support a conviction.There is an exception to the bar of Article 20(3). Testimonial evidence can be compelled if it is used for comparison with material that isÂ already in the possessionÂ of the investigators.InÂ Selvi,Â the scope of testimonial evidence was extended to evidence which, despite not being of oral or written character, provides material based on personal knowledge. Testimonial evidence does not cease to be so, merely because it is not spoken or written in nature. As long as there is compulsion, even by a deed, leading to anÂ expression of the contents of an individualâs mind, it would be protected under Article 20(3). This position of law is also consistent with the US law, where the right against self-incrimination spares an accused from âhaving to share his thoughts and beliefs with the Governmentâ [seeÂ Doe v. United StatesÂ (1988)].Basis the aforesaid position of law, it can be concluded that providing the password of a phone or unlocking it will amount to testimonial compulsion which is covered by Article 20(3). InÂ Seo,Â the Court stated that unlocking a phone would communicate three kinds of personal knowledge to the police:

(1) the suspect knows the password; (2) the files on the device exist; and (3) the suspect possessed those files. And, unless the State can show it already knows this information, the communicative aspects of the production fall within the Fifth Amendmentâs protection.Therefore, unlocking a phone is not as innocuous as providing a fingerprint. It amounts to providing information based on the personal knowledge of the accused, and is, therefore, testimonial in nature.As highlighted above, an exception exists with respect to the above rule and testimonial evidence can be compelled if it is for the purpose of comparison with facts that are already in the possession of investigators. This exception is similar to the âdoctrine of foregone conclusionâ developed by US Courts whereunder the State can compel the accused to furnish testimonial evidence if it already knows the information conveyed, making it a âforegone conclusionâ [seeÂ Fisher v. United StatesÂ (1976)].Â However, for this exception to apply, the authorities would have to establish that they have independent knowledge of the following:

(i) the phone belongs to the accused;

(ii) they can independently identify what files will be discovered from the phone; and

(iii) the documents they are seeking exist on the phone.

For instance, inÂ In re Grand Jury Subpoena to Sebastien BoucherÂ (2009), Sebastien Boucherâs laptop was seized while he was entering the US border. Upon inspection, the said laptop was found to contain some images related to child pornography and Boucher himself assisted the border agents in locating the pornographic material on the hard disk of his laptop. Due to the existence of images and videos involving child pornography on his laptop, Boucher was arrested.Subsequently, the laptop was rebooted for further investigation, but the hard disk of the laptop was found to be encrypted. To gain access to the hard disk, the investigation authorities applied for summons directing Boucher to produce an unencrypted version of the hard disk. The District Court found this case to be covered by the doctrine of foregone conclusion since the incriminatory act of production was superseded by the governmentâs independent knowledge of the existence and location of the documents.More importantly, the Court concluded that the investigation authorities are not required to be aware of theÂ contentsÂ of the files; they are only required to establish knowledge ofÂ existence and locationÂ of the documents. In this case, Boucher had himself earlier helped the police authorities and due to his act, the police authorities were aware about the existence and location of pornographic material on his phone.

II. Obtaining an order under Section 91, CrPC directing service provider to provide access to WhatsApp Chats
The investigation authorities may move court to get a summoning order compelling WhatsApp to reveal the chats of an accused. However, WhatsAppâs stance has been that due to its policy of end-to-end encryption, it does not have access to content of chats (seeÂ WhatsApp FAQ on end-to-end encryption).

WhatsApp has also reiterated the aforesaid stance before the Supreme Court of India (seeÂ Facebook Inc. v. Union of India, order dated September 24, 2019). In the aforesaid pending matter, the Court had previously given directions to the Centre to come out with definitive timeline with respect to notification of the revised Intermediary Guidelines which will provide more clarity on the duty of intermediaries with respect to furnishing information in an investigation.As perÂ Rule 3(5) of theÂ Draft IT Intermediaries Guidelines (Amendment) Rules, 2018, intermediaries would be mandated to enable law enforcement authorities toÂ traceÂ the origins of any unlawful content on their platforms. Even if the draft guidelines are brought into force, they wouldÂ merelyÂ require WhatsApp to locate the originator of a message, and not reveal the content of the message. Therefore, it would be difficult for the police authorities to compel WhatsApp to reveal the content of a chat.Arguendo, even if some law is in fact enacted to compel WhatsApp to reveal chats to the investigation authorities (which will have to pass the test of not being violative of the fundamental right of privacy), it wouldbe extremely difficult for the police to obtain a summoning order under Section 91 of the Code of Criminal Procedure (CrPC) for conducting a general search of WhatsApp chats on an accusedâs mobile phone toÂ discoverÂ incriminating material.The reason for the same is evident. Unless the police have accessed the accusedâs phone before or they have credible information about the existence of specific incriminating material on an accusedâs phone, courts would be reluctant to grant a summoning order because it is a settled position of law that Section 91 CrPC cannot be used for the purpose of a âroving and fishingâ enquiry (seeÂ State of Orissa v. Debendra Nath PadhiÂ (2005).It is imperative for police authorities to show, while seeking a summoning order under Section 91 CrPC, that the persons to whom the summons is addressed hold the records in question and that the same are necessary for purposes of the matter at hand. [seeÂ Sureshkumar v. C SandhumaniÂ (2015)].Even though exact specificity is not required, police authorities cannot make vague requests and the application for summoning cannot be based on âmere anticipationâ or âlikelihood of existenceâ.It would be interesting to see how this issue develops in the near future. If a law is in fact enacted to mandate intermediaries to assist investigation authorities to reveal chats of an accused person, major constitutional issues would be at stake in relation to privacy. Private companies have globally resisted being participants in the act of breach of privacy of their clients (for instance, Apple refusing to help FBI to create a back-door key to unlock iPhone of a terror accused).Only time will tell how this issue will play out in India.The author is a Civil Judge/Metropolitan Magistrate based in Delhi.This article has been written by the author in his personal capacity and the views are personal only.