Why 4,998 died in U.S. jails without getting their day in court 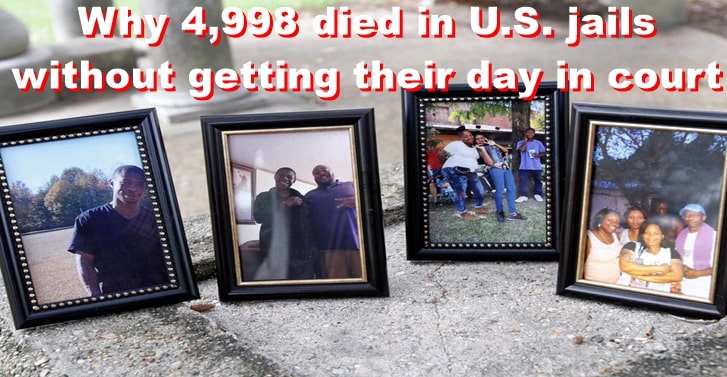 âHe needs a mental evaluation,â the landscaper recalls telling the arriving officer. Instead, Hill was charged with trespassing and jailed on suspicion of a misdemeanor offense that could bring a $500 fine.

It was a death sentence.

The next day, May 6, 2018, Hillâs condition worsened. He flew into a rage at the Madison County Detention Center in Canton, Mississippi, throwing a checkerboard and striking a guard with a lunch tray.Three guards tackled the 36-year-old, pepper sprayed him and kicked him repeatedly in the head. After handcuffing him, two guards slammed Hill into a concrete wall, previously unpublished jail surveillance video shows. They led him to a shower, away from the cameras, and beat him again, still handcuffed, a state investigation found. The guards said Hill was combative, exhibiting surprising strength that required force.

Video showed Hill writhing in pain in the infirmary, where he was assessed by a licensed practical nurse but not given medication. Mississippi law dictates that a doctor or higher credentialed nurse make decisions on medical interventions. But Hill was sent straight to an isolation cell, where a guard pinned him to the floor, removed his handcuffs, and left him lying on the cement. Hill crawled to the toilet. Then he stopped moving.No one checked him for 46 minutes. When they did, he didnât have a pulse. Within hours, he was dead. And he had a lot of company.Hillâs is one of 7,571 inmate deaths Reuters documented in an unprecedented examination of mortality in more than 500 U.S. jails from 2008 to 2019. Death rates have soared in those lockups, rising 35% over the decade ending last year. Casualties like Hill are typical: held on minor charges and dying without ever getting their day in court. At least two-thirds of the dead inmates identified by Reuters, 4,998 people, were never convicted of the charges on which they were being held.Unlike state and federal prisons, which hold people convicted of serious crimes, jails are locally run lockups meant to detain people awaiting arraignment or trial, or those serving short sentences. The toll of jail inmates who die without a case resolution subverts a fundamental tenet of the U.S. criminal justice system: innocent until proven guilty.

The U.S. Constitution grants inmates core rights, but those provisions are hard to enforce. The Fourteenth Amendment guarantees fair treatment to pre-trial detainees, but âfairâ is open to interpretation by judges and juries. The U.S. Supreme Court has ruled that the Eighth Amendmentâs ban on cruel punishment forbids âdeliberate indifference to serious medical needs of prisoners,â but proving deliberate negligence is difficult. The Sixth Amendment assures speedy trials, but does not define speedy.

The Reuters analysis revealed a confluence of factors that can turn short jail stays into death sentences. Many jails are not subject to any enforceable standards for their operation or the healthcare they provide. They typically get little if any oversight. And bail requirements trap poorer inmates in pre-trial detention for long periods. Meanwhile, inmate populations have grown sicker, more damaged by mental illness and plagued by addictions.The 7,571 deaths identified by Reuters reflect those stresses. Most succumbed to illness, sometimes wanting for quality healthcare. More than 2,000 took their own lives amid mental breakdowns, including some 1,500 awaiting trial or indictment. A growing number â more than 1 in 10 last year â died from the acute effects of drugs and alcohol. Nearly 300 died after languishing behind bars, unconvicted, for a year or more.As with much of the U.S. criminal justice system, the toll behind bars falls disproportionately on Black Americans, such as Hill. White inmates accounted for roughly half the fatalities. African Americans accounted for at least 28%, more than twice their share of the U.S. population, a disparity on par with the high incarceration rate of Blacks. Reuters was not able to identify the race of 9% of inmates who died.Jail deaths typically draw attention locally but escape scrutiny from outside authorities, a gap in oversight that points to a national problem: Americaâs system for counting and monitoring jail deaths is broken.

A BROKEN SYSTEM OF FEDERAL OVERSIGHT

Americaâs 3,000-plus jails are typically run by county sheriffs or local police. They often are under-equipped and understaffed, starved for funds by local officials who see them as budgetary burdens. A rising share have contracted their healthcare to private companies.

Yet there are no enforceable national standards to ensure jails meet constitutional requirements for inmate health and safety. Only 28 states have adopted their own standards to fill the gap. And much of the oversight that does exist is limited by a curtain of secrecy.

The Justice Departmentâs Bureau of Justice Statistics has collected inmate mortality data for two decades â but statistics for individual jails are withheld from the public, government officials and oversight agencies under a 1984 law limiting the release of BJS data. Agency officials say that discretion is critical because it encourages sheriffs and police to report their deaths data each year.

The Justice Department does issue broad statistical reports on statewide or national trends. But even those fatality numbers donât always tell the full story. Some jails fail to inform BJS of deaths. Some report them inaccurately, listing homicides or suicides as accidents or illnesses, Reuters found. Justice Department consultant Steve Martin, who has inspected more than 500 U.S. prisons and jails, said that in all the cases heâs investigated, he recalls only one homicide being reported accurately. The others were categorized as âmedical, respiratory failure, or whatever,â he said.Other jails find other ways to keep deaths off the books, such as âreleasingâ inmates who have been hospitalized in grave condition, perhaps from a suicide attempt or a medical crisis, so theyâre not on the jailâs roster when they die. Sheriffs sometimes characterize these as âcompassionate releasesâ that allow inmatesâ families a chance to spend their final hours together without law enforcement supervision.In all, Reuters identified at least 59 cases across 39 jails in which inmate deaths were not reported to government agencies or included in tallies provided to the news organization.

The Justice Department has grown more secretive about the fatality data under the Trump administration. While BJS never has released jail-by-jail mortality figures, it traditionally has published aggregated statistics every two years or so. The 2016 report wasnât issued until this year.And, a Justice spokesman said, there are âno plansâ to issue any future reports containing even aggregated data on inmate deaths in jails or prisons.The report delays are âan outrage,â said Representative Bobby Scott, a Virginia Democrat who co-authored the original reporting law in 2000 with a Republican colleague. Scott said secrecy was never the goal. He co-authored a 2014 update, which restricts federal grant money when jails donât report deaths and shifts data collection to a different Justice Department agency that would not be restricted from releasing jail-by-jail data. The updated law has yet to be implemented.

âThe whole point,â Scott said, âis we suspect a lot of the deaths are preventable with certain protocols â better suicide protocols, better healthcare, better guard-to-prisoner ratios. Youâve got to have information at the jail level. You have no way of really targeting corrective action if you donât.â Because the government wonât release jail-by-jail death data, Reuters compiled its own. The news organization tracked jail deaths over the dozen years from 2008 to 2019 to create the largest such database outside of the Justice Department. Reporters filed more than 1,500 records requests to obtain information about deaths in 523 U.S. jails â every jail with an average population of 750 or more inmates, and the 10 largest jails or jail systems in nearly every state. Together, those jails hold an average of some 450,000 inmates a day, or about three out of every five nationwide.