Why Do Advocates Bow In Court? 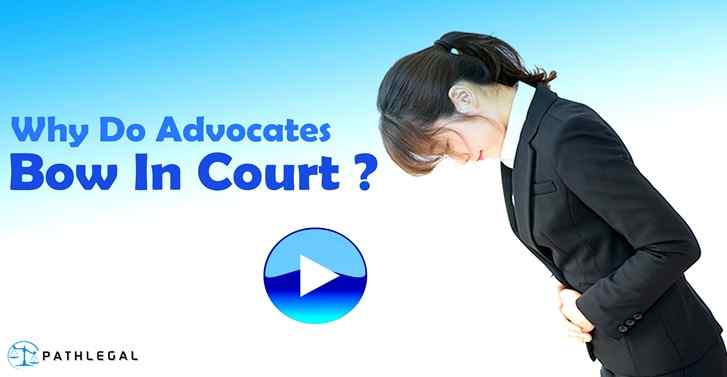 Have you ever wondered why you and all the other advocates bow when in the Court?

Everyone in Court, including advocates, police officers and the public must conduct themselves according to the Court's procedures. Thatâs certainly right and proper. The business of the Court is always serious business because the outcomes have a real impact on the lives of the plaintiff and defendant.

It is natural to believe and even important to believe that the Court is an official place and there is a hope that as an advocate, you will behave in a humble way and follow the rules and procedures.

When we go to the Court, we see every advocate bow to the Magistrate or Judge.

Looking more deeply into the matter, we can learn that the custom of showing deference by the advocates to the Magistrate or Judge is actually an ancient custom that most likely goes back to Roman times in European culture.

Later in European history, the Roman Emperors were replaced by Kings. I have found that the reason why everyone bows down to the king is the tradition of not only showing respect but subordination to the Royal Arms as the physical presence of the King or Queen when they are absent from the venue.

The Royal Coat of Arms came into being in 1399 under King Henry IV. It is still used by the reigning monarch of what is still called Great Britain.Â  Of course, Great Britain is not so great anymore, and India has been an independent country for 72 years, so is the salute and humbling of self through the Is bow still appropriate?

In Great Britain, therefore, Magistrates and Judges are the representatives of the Crown and so we are not bowing down to the judge but to the Royal Coat of Arms to show and the respect for the continuity of tradition.

The Court bow resembles a dignified nod, a neck bow. It has a reassuring quality, even if antique, recalling the long history of Law through the centuries, especially in Europe and more especially in Great Britain, always a place where a tradition is a form of national comfort to the citizens who value the past.

Ironically the Coat of Arms does not reflect the visualization of a number of arms but is symbolic of guns and swords and weapons, which required arms to use them. Flags, too, were used mainly to establish identity in battle. Coats of Arms in Great Britain also evolved as family crests, with certain images and writings particular to a large landowning family usually headed by a âLord.â In India, we would call them zamindars.

If you like Coats of Arms, do you think we should also start wearing white wigs again? Â Very respectful, very traditional, also very hot, but still worn in the Courts of Great Britain.