Will Donald Trump end up in prison? He could be a step closer â¦ 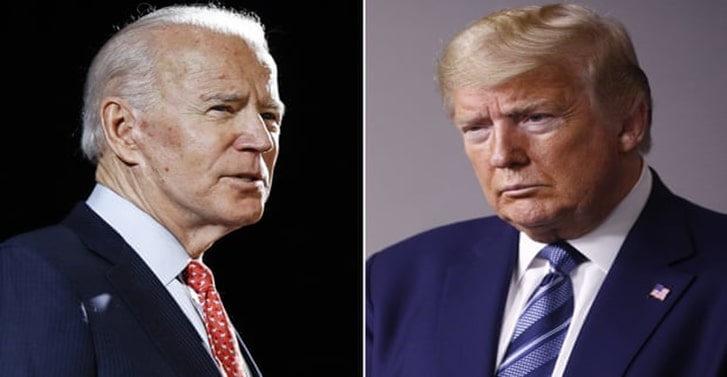 Joe Biden has pledged that, if elected, he wonât pardon Trump. Is the presidentâs attempt to whip up a scandal about Obama because he is scared of going to jail himself? On Monday, the US attorney general, William Barr, burst his bossâs bubble andÂ dismissed the possibilityÂ of a criminal investigation into Obama or Biden. Because, you know, they didnât do anything wrong. Trump responded to Barrâs statement in his usual fashion: sulking like a petulant child and saying: âWell, if it was me they would [investigate]â before continuing to babble incoherently.It may be wishful thinking, but I have a feeling that one reason Trump is so keen to accuse Obama and Biden of criminality is because he is starting to get nervous about going to jail himself. Last week, Biden pledged that, if elected president, he wouldnât use his executive powers toÂ pardon Trump of potential crimes. This wasnât the first time the presumptive Democratic nominee has said he wouldnât go easy on Trump. In October, Biden told anÂ Iowa radio stationÂ that it had been a mistake for Gerald Ford to pardon his predecessor, Richard Nixon, after Watergate in 1974. Pardoning Trump, Biden said, âwouldnât unite [the US]â and would send the message that some people are above the law.

Of course, as it stands, the US president is above the law. In 1973, amid the Watergate scandal, the Department of Justice adopted the position that a sitting president is âconstitutionally immuneâ from criminal prosecution, a position it reaffirmed in 2000. As long as he is president, Trump is safe.When he leaves office, however, it is another matter: there are a host of charges he might face. These includeÂ obstruction of justiceÂ charges in relation to the Russia investigation; illegally withholding military aid to Ukraine in order to pressure them to investigate his political rivals; and soliciting campaign donations from foreign nationals â all of which Trump denies. According to the investigative site the Intercept, the laws Trump has potentially broken in his interaction with Ukraine and China as president could land himÂ 10 years in prison.And it is not just Trumpâs conduct as president that has opened him to potential legal trouble. There is also the matter of his financial and tax dealings, which are the subject ofÂ numerous lawsuits.Importantly, how long Trump stays in power has a bearing on any potential legal liability. The statute of limitations on obstruction of justice charges, for example, is onlyÂ five years. So if Trump gets another term, he will run down the clock on that. Honestly, if you want to do the crime without doing the time, it really pays to be president.

If Trump ever goes to jail, it will be one of the happiest days of my life. Not everyone is so enthusiastic about âlocking him upâ, however. Earlier this year, the then Democratic presidential candidate Andrew Yang said that, if he were president, heÂ wouldnât investigate Trump: âIf you look at history around the world, itâs a very, very nasty pattern that developing countries have fallen into, where a new president ends up throwing the president before them in jail.âLook, I understand that the US, where people die because theyÂ canât afford diabetes medication, doesnât want to be like a âdeveloping countryâ. Nevertheless, there is a very nasty pattern into which authoritarian regimes have fallen, where the leader does whatever they like with no repercussions. I am not sure the US wants to be like that, either.I have no idea what the chances of Trump ending up in prison are, but I am pretty sure he is not happy that there is even a small possibility he might swap the White House for the âbig houseâ. But hisÂ approval ratings are droppingÂ and theÂ chances of a President Biden are rising. That means Trump is going to do everything he can to win re-election in November; he is not just fighting for another term, he is also fighting for his freedom. He is fighting to avoid the possibility of a Trumpgate.