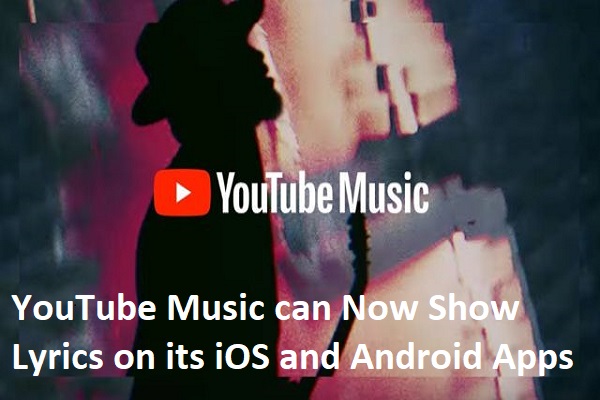 The users of YouTube Music can now enjoy listening to their favorite song along with its lyrics. The company proclaimed on 24thMarch that from now, their music service would provide the lyrics of the songs. The users who are willing to avail of this service should press the button of me while playing any song. This will pop-up the lyrics of the subsequent song beneath its tracking bar. The service will be included in both OS’s devices such as iOS and Android.

Although several music providers such as Spotify and Apple Music are providing this service for a very long time, the lyrics showing feature of YouTube Music is intended to be more advanced. Both the above-mentioned app has a real-time functioning, more clearly speaking the lyrics keep on running along with the track. Whereas in YouTube Music, the users need to hover down the lyrics in case they are willing to follow them alongside the song.

The app doesn’t contain lyrics for all the songs, as several users have complained about it. Similarly, various times YouTube Music lacks in showing lyrics. This clearly manifests that the feature hasn’t been developed properly, as it includes various flaws in it. One of the major flaws is that the lyrics need to be manually hover-down in order to read them. The second one is that the lyrics section gets totally freeze while trying to read lyrics. The last one is the app doesn’t contain lyrics for numerous songs. In reference to this context, Youtube broke its silence and said that the newly updated features are currently on testing. All the problems and the flaws will be fixed in the upcoming days.

Youtube is one of the most-streamed videos watching platforms in the world. Almost everyone is fond of it. Recently we have seen that they launched their music app known as YouTube Music, and it becomes popular in no time. However, their action of updating new feature also entice various fans towards it. But after witnessing numerous flaws in the feature, the fans are really disappointed. YouTube Music has to do something to fix these issues in their newly updated feature as soon as they can because it will not only going to ruin their reputation in the market, but it also depletes their standard in Business.

The world of streaming programs is enhancing every day, and one of the major reasons behind it is the major on-going outbreak in the world. This imposed almost everyone to dwell at their home and enjoy their favorite music, movies, or TV show. The subsequent initiative of YouTube Music to include lyrics showing a feature on these days was incredible, but due to lack of cons, it failed. Now, we all need to wait and see when YouTube fixes all the issues present in their app alongside what’s new they bring for us.

Smith is a trained office.com/setup expert who works with the development team with feedback from customers to make it to expectations. He lives in New York and In addition to his work, he also writes for his personal blog.